Putting the Prairie Back 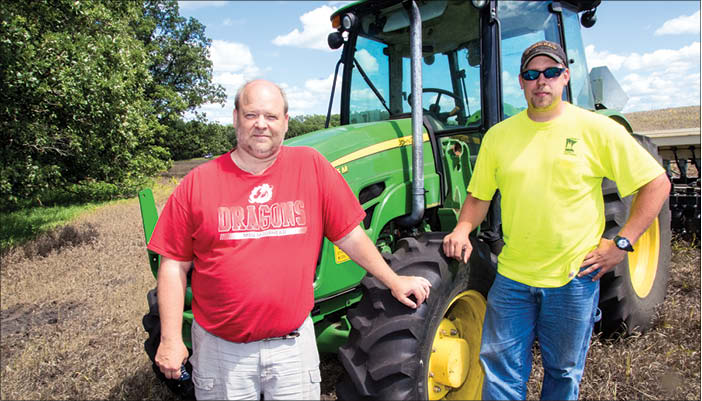 Milkweed and butterflies, gopher mounds and turkey vultures – the prairie as Nature intended is making a comeback five miles east of Glyndon.

The timeless silence of the prairie has begun to reemerge this summer, punctuated by the occasional toot and rattle of freight trains on the railroad that forms the MSUM Regional Science Center’s north border. One year after the contentious closing of the last nine holes of the Ponderosa Golf Course, the acreage along the Buffalo River is being restored to its pristine original condition. Wood-lined fairways are reverting to riverside forests, while adjacent upland fields once used for farming are again supporting a natural blend of native grasses and prairie flowers.

It’s all part of an ambitious five-year project that’s taking finally taking here – a dream nearly 40 years in the making that’s restoring the natural status of one of Minnesota’s largest and least-distrubed tracts of pristine tall-grass prairie. The late Roland Dille, Jerry Haukebo and Paul Feder, whose original vision is finally coming to pass, would be proud to see how the seed they planted so long ago has blossomed.

“We have a very unusual partnership going here,” says Tony Bormann, outreach coordinator for MSUM’s College of Science, Health and Environment. Together with Buffalo River State Park and the Nature Conservancy’s Bluestem Prairie Preserve, the MSUM Regional Science Center is helping maintain the state’s largest stretch of undisturbed and restored prairie as a resource for scientific study, preservation and recreation. The three groups manage a total area of some 6,000 acres, 400 of them designated for MSUM’s research and education program.

Last week, visitors could watch a bright green tractor plugging wild seed into the soil on higher ground – much of it harvested in past seasons from the nearby flatland at the entrance to the science center. All traces of commercial agriculture and farm chemicals were first stripped away. Then restoration specialists from the Department of Natural Resources began reseeding with native plants, matching the replanted varieties as closely as they can with patches where they grew before farmers plowed the ground.

Tony explains that the replanting process marks Year One of a five-year restoration project funded by the LCCMR – the Legislative-Citizen Commission on Minnesota Resources, an advisory group formed in 1988 to allocate proceeds from Minnesota’s state lottery and the much newer Outdoor Heritage Fund created by the 2008 Legacy Amendment. More than half a million dollars is being invested to bring 143 acres of prairie and 17 of riparian terrace (riverbank) forest back to its roots.

In future years, MSUM students and faculty will monitor the genetic diversity and species of plant life, along with the returning populations of native mammals, birds and insects. What they learn from the restoration process will be used to guide similar projects here and in other parts of the country, providing accurate observations and how-to instructions to be published in journals on restoration ecology and education.

What does it all mean? Scientists, educators, students and the public are already learning more of the fascinating tales this land can tell – often overlooked by those who take it for granted, but rich in lessons for those who take the time to study them.

The Regional Science Center has been an evolving story since 1978, when the Fargo Elks Club deeded its Ponderosa Golf Club and surrounding land to the Moorhead State University Foundation with the expectation that the land would be used solely for scientific and educational purposes. Golf continued on the property until a master plan was developed and funding could be secured.

That vision has come together slowly but steadily. The original plan was created in 1983, laying out a blueprint for using turning the land into a teaching and learning lab for students of all ages. Construction of the handsome 16,000-square-foot interpretive center began in 1991. In 2003, the National Science Foundation underwrote an expanded study of how to use the area for research. That led to submitting the LCCMR grant proposal in 2014 – and finally getting the go-ahead in early 2015.

In the meantime, though, the Regional Science Center has been anything but fallow. It welcomes some 7,000 K12 students every year to study nature and the environment. All Moorhead third-graders visit every year for a prairie unit that combines social studies, math and science. Fargo fifth-graders learn about ecosystems here, led by their classroom teachers and MSUM undergraduates in science education. Kids in grades four through six span its trails on cross-country skis and snowshoes in January and February for “Why Not Winter” cold-weather exploration.

University faculty and students have emerged as the MSUM center’s top priority. Science and education majors roam the grounds in pursuit of their studies. They put what they’ve learned to immediate use by conducting many of the educational sessions for younger students and public groups.

Their counterparts from NDSU and Concordia also use the facilities, along with science enthusiasts from beyond the campuses. NDSU entomology professors and students will be gathering one night next week, for example, to collect moths – a venture that involves a large sheet, a bright light and volunteers to scoop up and study the bedazzled insects. The F-M Astronomy Club gathers for a star party Aug. 26 in the center’s Paul Feder Observatory. Another contingent collaborated with the Buffalo River State Park naturalist last weekend to stage a program on prairie plant diversity for the public, including families staying at the nearby campgrounds.

Archeologists and anthropologists, too, have a field day at the center. MSUM’s George Holley and students just completed a search for artifacts that help fill in a gap in the human history of the region. Earlier MSUM researchers had already identified signs of prehistoric occupation dating back to 6000 BC, as the great Lake Agassiz was just beginning to drain away. Others discovered signs of human inhabitants between 1000 and 1200 AD on the higher ground above the river. Holley’s crew has begun to fill in the gap between those two cultures, uncovering Woodland pottery shards and dart points believed to date from 300 BC to 500 AD.

The Regional Science Center’s reputation is spreading well beyond the local academic community. A University of Wisconsin archeologist and his students spent several weeks on the lowland dig earlier this month. The center is also fielding diverse inquiries related to its restored prairie environment, like a proposal from a group of herpetologists interested in documenting the return of reptiles as the land recovers.

“What makes the Regional Science Center unique is the range of expertise we have at our fingertips,” Tony points out. “Geology, biology, anthropology, zoology, astronomy – we can explore just about any question that arises. Between our faculty and students, plus allies in the DNR, Parks and the Conservancy, we’re building a rich resource here that’s rare, surprising and precious.”