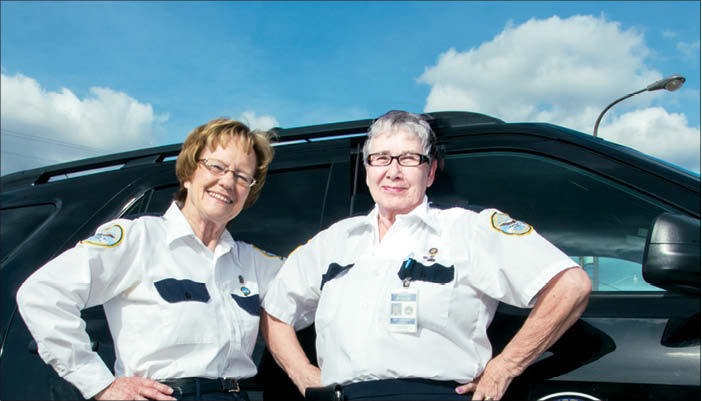 When Eileen Hastad and Ruthie Johnson joined the first crop of Moorhead police volunteers almost 20 years ago, no one was quite sure how their group would be received.

Would full-time professional police officers accept the civilian men and women who donned special uniforms and joined their ranks? Would Moorhead residents respond to the mostly middle-aged squad of helpers, not only in the department but out on the street? And how would it work out for the volunteers themselves?

“When we started, some of the officers were kind of leery,” Ruthie remembers. “They soon realized we could do the kinds of things they didn’t have time for.”

“We’ve gotten wonderful support from the staff and the city,” Eileen adds. “They’re always ready to guide us through whatever we need to do.”

Both women have dedicated more than 5,000 hours to working with local law enforcement. Like their fellow volunteers, their first encounter with policing came through the Citizens Police Academy, an annual program that introduces residents to the police department’s many services and responsibilities. Enthusiastic about what they’d learned, they stepped up when fellow CPA alums Dave Anderson and Cliff Harrison proposed the volunteer group to Police Chief Grant Weyland.

It has worked out well – perhaps even better than its founders, back in 1999, could have predicted. Today the two dozen men and women of the Moorhead Police Volunteer Program, from college students to retired longtime Moorhead residents, play an essential part in helping to keep the city safe. Six have been with the program for at least 10 years; another five have served for from five to nine years.

“We’ve been accepted as part of the city’s structure,” notes Ruthie, who was the group’s first Police Volunteer of the Year. “Without us, there would be a big void.”

They help stretch the short-handed department’s staff of sworn officers, relieving them to handle more serious matters. From traffic control during parades and the Fargo Marathon to updating the city’s database of emergency contacts for local businesses, they pitch in when extra hands are needed … often taking on tasks that might otherwise languish amidst an overworked staff.

Volunteers contributed about 2,000hours of time to the force in 2016 – the equivalent of almost $41,000 in salary. They’ve put in almost 55,000 hours since the program’s inception, amounting to nearly a million dollars in service.

And their work shows up on the city’s bottom line in another way. Writing tickets is just one of the ways in which they serve, but the numbers are impressive: Last year, volunteers wrote 4,192 tickets for illegal parking in handicapped zones, fire lanes and neighborhoods (where street parking is banned from 8 a.m. to 4 p.m. one day a week). That totaled $109, 485 in fines. The historical total is close to $2 million.

Both women have put in many, many hours at the wheel of the volunteers’ police vehicle, patrolling sectors of town on days when parking is prohibited. They also keep an eye on unauthorized cars in handicapped parking and vehicles blocking fire lanes.

“It was tough for the first couple of years,” Eileen confides. “Parking regulations hadn’t really been enforced on a regular basis, and we took a lot of abuse. We were called every name in the book.” As residents began to notice the no-parking signs that had been posted all along, though, acceptance increased. “Now people pay more attention. We’ve even had business managers come out to their parking lot to thank us for taking care of violations.”

Unarmed like all the volunteers, the two grandmothers have learned a lot from encountering objectors during their parking rounds. “I’ve only felt threatened once,” says Ruthie, who finally was forced to retire from ticketing when her two artificial knees ruled out climbing in and out of the high SUV in which they patrol. “I gave a ticket to a man who was parked in the fire lane outside Hornbacher’s. He just went kind of berserk.

“People will try anything,” she adds wryly. Her unhappy customer finally calmed down on his own. In truly dire situations, the volunteers radio for immediate backup from sworn officers.

Members of the public can be on less than best behavior when they see a ticket being slipped beneath their window wipers. “I’ve never been lied to so much – even by a minister once,” Eileen observes. “People will try anything to talk their way out of a ticket.”

Their arguments, she adds, don’t work. Volunteers photograph violators at the same time they enter a ticket in the handheld writer. They can’t cancel it, once written. Those who object are politely referred to the police department for further clarification. “We don’t make the rules,” she emphasized. “We just enforce them.”

Not all their police work involves cars and driving. Both have pitched in to help officers screen hours and hours of surveillance video, looking for proof a suspect was where he insisted he had never been. Ruthie typed data into foot-high stacks of fingerprint cards collected from residents of the jail.

Volunteers perform house checks when homeowners are out of town. They’ve conducted seatbelt surveys and worked with the restorative justice panel. They updated the city’s badly outdated records of business owners and employees to be contacted in case of emergency. They’ve fingerprinted children – thumbs only – during community events, sold pet licenses, checked property out of the impound lot and sorted through boxes of jail correspondence and phone transcripts.

The police volunteers played a critical during the stressful flood events of 2009, 2010 and 2011. They direct traffic for special undertakings like the “Extreme Makeover” project in south Moorhead and the Dental Association’s Mission of Mercy on the Concordia campus. Last year they told drivers where to go at a total of three parades, two marathons, one bike race, the Torch Run for Special Olympics, Streets Alive, Night to Unite, the Kidsfest bike rodeo, Moorhead High hockey games and the police procession for Fargo Officer Jason Moszer’s funeral.

While the city appreciates their work, Eileen and Ruthie agree, their most appreciative audience may just be their own families. Eileen has two grandchildren; Ruthie has seven, along with two great-grands. “They like to see me in my uniform,” Ruthie confesses. “It makes you a little more of an authority than a regular grandma.”

“They really do like it. I hear, ‘Grandma, can I see your police car?’” Eileen adds. “Of course they tell people I’m a policeman.”

It’s a misunderstanding they take pains to avoid when they’re working with the public. “We make it clear that we’re not officers,” Ruthie observes. “When I put on the uniform as a volunteer, though, I’m representing something very positive in our community. It makes me feel proud.”

Adds Eileen, “People have come up to me and told me, ‘I need help.’ As volunteers, we have the connections to get them the assistance they need. We are the good-will ambassadors for the city.”