Bringing Cultures Together, One BLOCH at a Time 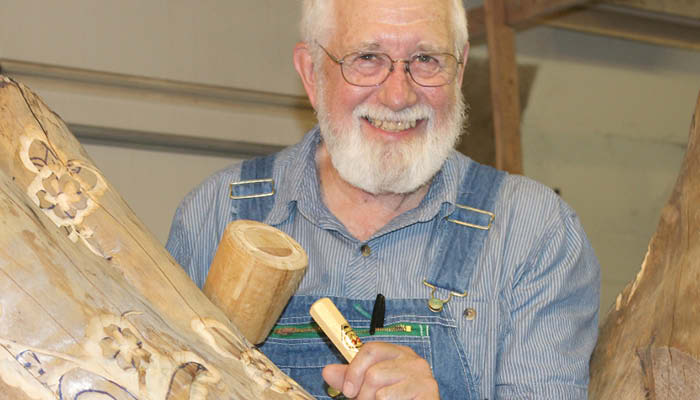 Technology has made the world smaller. It is now easy to connect to someone living across the globe, and cultures today know more about each other than ever. Rarely, however, has there been an individual event that has been able to tie everyone together; to meld the world’s diverse cultures into one. To provide the world with one artistic project, to give people across the globe a shared vision, may appear impossible. Fortunately, two men from Switzerland have discovered a way to do just that. Their BLOCH project is connecting cultures in a way that hasn’t been seen before.

The project involves a large tree trunk that centers on an old Carnival custom from the Swiss Appenzell region. Every other year, the last fir tree of the winter is decorated and pulled by twenty men from the village of Urnäsch to neighboring Herisau and back. At the end of the trip, the trunk (known as the “Bloch”) is auctioned off to the highest bidder, who historically puts it to good use as furniture or shingles. In 2011, however, the Swiss artistic duo Com&Com (Marcus Gossolt and Johannes M. Hedinger) purchased the tree to be used as the centerpiece of their global art vision. According to the duo’s website, “our goal is to create dialogue among various people, traditions, and customs around the world in an interactive way by uniting contemporary art, folk culture, and folk art.”

The BLOCH will travel the world, visiting each continent before returning to Urnäsch. During each stop, community members will add representations of their individual cultures, turning the BLOCH into a traveling art exhibit. The seventeen-foot long Spruce tree arrived in Moorhead on June 23, where it will be worked on at Moorhead’s In the Chips. Until its arrival in the Red River Valley, the BLOCH had not been carved into. “We consider it a real honor to be the first and only (carvers) in North America to work on it,” said Larry Longtine, a long-time member of the Red River Valley Woodcarvers. According to Larry, a select few of the group’s carvers are working on the BLOCH. “It is a combination of prairie rose, wheat, and other designs,” he explained. “It is a very free flowing design.” The fact that group members are the first and only carvers to add their artistic stamp to the project is a testament to their talent and superb artistry. “We are defining it,” said Troyd Geist, folklorist with the North Dakota Council on the Arts.

Along with Barbara Hauser, Geist has been instrumental in working with Com&Com to get the BLOCH to the region. Originally from Zurich, Switzerland, Hauser studied Fine Arts and Linguistics in North Dakota. She met Com&Com and talked to them about the beauty and majesty that is North Dakota. Liking what they heard, the two men visited the area last summer and, according to Geist, “loved the authenticity of the people and their traditions.” North Dakota will be the only state the BLOCH tours in North America before it is sent off to other continents.

In addition to the work being done at In the Chips, other North Dakota wood workers will also be adding to the project. In order to be transported across the ocean, part of the Bloch had to be trimmed away. Some of the pieces were sent to North Dakota, where they will be transformed into cultural representations to be added to the BLOCH. One such representation will be a flute that will be put back into the tree. Behind the flute will be a painting of a Meadowlark, a bird rich with cultural significance and history. “We have very ancient and rare traditions that will be represented,” Geist explained.

North Dakota artists will also be adding poetry, metal work, and Native American art to the BLOCH – including birch bark storytelling scrolls and pictographs. It will be a wide and varied representation of area culture. “We want to show the depth of culture and richness of heritage that is still part of our everyday life,” Geist said. “Our contribution will be extremely integrated with lots of deep meaningful layers.”

The concept of the BLOCH is similar to the Native American tradition of the talking stick, which involves an elaborately carved stick used during ceremonies to identify whose turn it is to speak. The BLOCH is considered a global talking stick. “This is our turn to speak,” Geist explained. Although area artists might be the focal point of our community’s contribution to the project, they aren’t the only ones that can get involved; anyone can add their personal touch to the BLOCH. As the tree travels, community members will have the chance to leave messages on 5” x 5” pieces of paper that will then be placed into cracks of the tree. When the BLOCH returns to Switzerland, the messages will be unveiled and become part of the permanent exhibit. Geist strongly urges people to come down and interact with the tree – to leave messages for the world to read. “This is our chance to highlight the positive and give the world the real face of who we are,” he said.

The BLOCH has already visited Germany, Taiwan, Shanghai, and Singapore. After leaving North Dakota in August, it will be sent on to its remaining destinations. After visiting each continent, it will return to Switzerland, where it will become part of a permanent exhibit. The original goal of creating a global interactive art project likely seemed daunting. Fortunately, Com&Com was able to create partnerships throughout the world that has helped bring their dream to fruition. When the BLOCH returns to Switzerland, it will contain pieces of cultures from all over the globe. In today’s unstable and unpredictable world, bringing nations together for any purpose is a remarkable feat. The ability for countries to put aside their differences for the purpose of creating something bigger than themselves is impressive. It may be only one tree, but it has accomplished something few others have been able to do.

The BLOCH will make its public debut at the Downtown Fargo Street Fair from July 17-19. It will return to the area on August 3 for a “BLOCH party” at the Hjemkomst Center in Moorhead. In between, the BLOCH will make various stops throughout North Dakota based on the following schedule.

Many individuals and agencies are responsible for giving this project life. Although there are far too many to name here, some of the local agencies involved with BLOCH include: the North Dakota Council on the Arts, Arts Partnership, Rugby Convention & Visitors Bureau, Historical and Cultural Society of Clay County, and the National Endowment for the Arts. A complete list of partners can be found on the BLOCH’s website at www.bloch23781.com. More information on Com&Com can be found at www.com-com.ch.