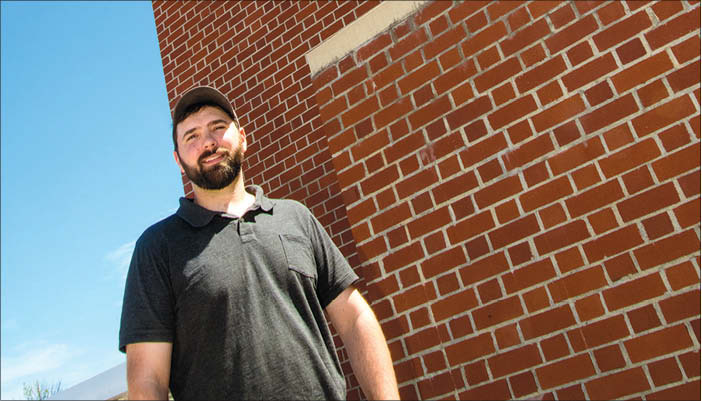 Rourke Art Gallery supporters will share a special sight Saturday night. Along with the preview of its 57th Midwestern Invitational Exhibition of Fine Art, they’ll see the light – the official first glowing of a unique neon display in the courtyard at Main Avenue and Sixth Street.

Moorhead neon artist Chris Orth – he calls himself a “neonist” – considers the 6-by-6-foot design more than simple signage. “I don't really think of the Rourke project as a sign so much as a neon beacon,” he explains. “That's why I think it's so neat that it is somewhat cryptic as to what it is, exactly.”

The new artwork faces west on the freestanding brick wall outside the Rourke, back to back with the bas relief of Minerva, the Etruscan goddess of wisdom, rescued from the original Moorhead High School. It depicts a version of the logo the gallery and museum has used since 1960, when founder Jim O’Rourke established it on Fourth Street. It has occupied its present location in the former Moorhead Post Office since 1966.

Chris was part of the group who first envisioned the lighted sign – the “beacon” – a year ago. It has been in the works for six months, funded by a unique raffle calling on the talents of fellow Rourke enthusiasts Sam and Coralie Wai. Members of the gallery have sold exactly 50 tickets, at $100 each, to fund the ambitious project. The prize: a French dinner hosted by the Wais that features five courses, each accompanied by a special wine selected from their extensive wine cellar. The winner’s name will be drawn Saturday as part of the festivities.

In addition to raffle proceeds, two other contributors have made major gifts to turn the light on. Indigo Signs, where Chris is employed, has donated all of the services and supplies needed for its installation. Voxland Electric of Moorhead is wiring the project at no cost.

Chris completed the fabrication of metals and neon tubes and wiring in the Indigo workshop under the banner of his own new business, Fireline Studio. The Rourke design is the second bearing the Fireline imprint; the first hangs in the Junkyard Brewing Company on First Avenue North.

A graduate of MSCTC Detroit Lakes’ program in neon technology, Chris describes his work as the last hands-on aspect of professional signage, where computers have taken over most design and fabrication tasks. While, in his words, “the medium of neon is dying out” on the commercial front, he says it’s emerging as a form of art – something his Fireline Studio is focusing on for both business and personal commissions.

“It takes a very long time to learn how to do it,” he says. “You need real patience to work through the early stages of bending glass tubes. You can’t get frustrated and angry. You need your zen.” While colored light is at the heart of neon creations – using several types of tubes, from imported Italian stained glass to plate glass colored with paint, along with carefully formulated blends neon and argon gases – shadows also play a part in the atmosphere created by the finished work.

Saturday’s lighting is at the climax of the preview event, beginning at 7:30, with music by the Hartford Street Brass. Awards selected by jurist Andy Maus of Plains Art Museum will be distributed at 8:30. The afterparty begins at 9 in the courtyard, with beverages by Junkyard Brewing and music by singer-songwriter Tristan Larson and the lighting at 9:30. Tickets are available at the door, $15 for members and $30 for nonmembers.

While the neon turn-on highlights this week at the Rourke, it’s only the first step in a major exhibition that can be viewed from Sunday through Sept. 4. Begun the same year that O’Rourke opened his original gallery, the invitation-only exhibit this year centers on the theme “home.”

The museum will display works in every medium by about 90 professional artists – ranging in age from their 20s through their 80s, local and regional, and working in virtually every medium, from paint and sculpture to ceramics, photography, prints and glass. Some exhibitors are new to the show, but many have been part of the Rourke’s history … including three who were O’Rourke’s classmates at Concordia, Abner Jonas, Kathleen Ristinen and Philip Thompson. One local artist, Yvonne Butzon, has been part of every exhibit since the very first.

The Rourke Art Gallery is open from 1 to 5 p.m. Fridays, Saturdays and Sundays, and by appointment. Admission is $5.