So God made a farmer 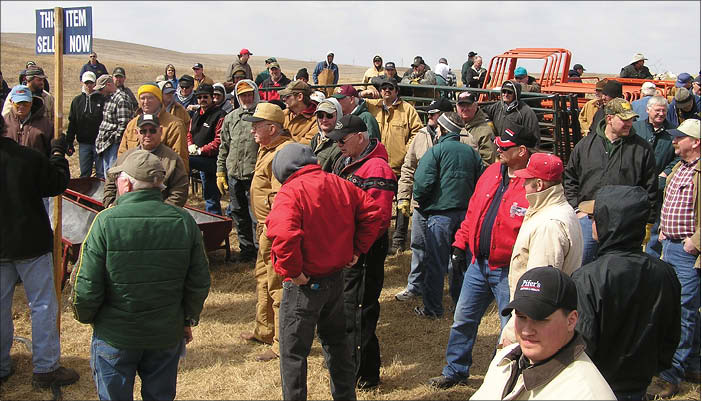 In 1978, radio broadcaster Paul Harvey gave a speech at the Future Farmers of America (FFA) convention. The speech was later given the moniker, “So God Made a Farmer.” Fast forward to 2012, and millions of people heard Harvey’s speech as part of the two-minute Ram Trucks commercial during Super Bowl XLVII. The ad was made in collaboration with the National FFA Organization and Ram agreed to donate up to $1,000,000 to the organization, based on the amount of $100,000 for every 1,000,000 views on YouTube. The goal was reached in less than five days.

The respect society has for farmers cannot be overstated. For thousands of years, farmers have been responsible for feeding the masses. Although food production has become more streamlined and thus more efficient since the Industrial Revolution, it is still the farmer that sets the process in motion.

Kevin Pifer has been in agriculture for the past 34 years, 17 of which have been in auction, real estate, and land management as part of Pifer’s Auction and Realty, one of the top land auction companies in the nation. “Pifer’s has experienced enormous growth in land auctions since 2005, but the fastest growing segment of our company is land management,” Kevin explained. “Pifer’s currently manages 110,000 acres of farm land for investors, retired farmers, and trusts.”

Kevin has experienced a wide variety of changes in the industry over the past few decades, many of which can be attributed to technological advancements. “Technology advances have helped producers increase efficiencies particularly by cutting waste and reducing input costs,” he said, adding that the internet has driven marketing and purchasing strategies for buyers and sellers.

The agriculture industry is one of the most tenuous businesses, and farmers are largely at the mercy of a variety of factors they have nothing to do with. According to Kevin, the industry is currently experiencing a down-cycle. “Production agriculture is in a period of anemic profits with sluggish commodity prices,” he said. “Input costs are part of the equation that are providing some relief with lower fuel and fertilizer costs, but this year will be challenging for farmers to make a profit.” Fortunately, industry experts are predicting improved conditions next year.

Minnesota Department of Agriculture Commissioner Dave Frederickson understands the current state of the industry. “The combination of lower projected market prices for corn and soybeans in 2016, together with nearly steady input costs for seed, fertilizer, and chemicals, will limit estimated potential returns,” he explained. “According to the U of M Center for Farm Business Management, median net farm income in Minnesota dropped from $195,000 in 2012 to $43,000 in 2014. Farmers are going to need to look for ways to reduce or control direct and overhead expenses to improve their profit potential.”

Despite the current struggles, Frederickson is optimistic. “Minnesota has a diverse ag economy, we have invested in technology and research, and we understand the importance of being good stewards of our water and land resources,” he said. “All of these factors will help us through 2016 and beyond.”

March 13-19 is National Ag Week, sponsored by the Agriculture Council of America. It is designed to be a time to reflect on the societal contributions of farmers and offer our appreciation. According to the program’s website, Americans are encouraged to “understand how food and fiber products are produced, value the essential role of agriculture in maintaining a strong economy, and appreciate the role agriculture plays in providing safe, abundant, and affordable products.”

Although agriculture provides almost everything we eat, use, and wear on a daily basis, few people (particularly young people) truly understand its importance. National Ag Week is a time to educate the general public about the industry and encourage young people to consider career opportunities in agriculture. “Each American farmer feeds more than 144 people, a dramatic increase from 25 people in the 1960s,” the website says. “As the word population soars, there is an even greater demand for the food and fiber produced in the United States.”

Like most industries, technology has continually impacted agriculture. Over the past decade, the agricultural industry has seen a variety of technological innovations that have helped transform the way farming practices are conducted. Among them are: GPS systems that are used to improve the accuracy of precision farming tools; the use of the Internet to enhance best practices; and weather satellite technology that is used to improve forecasting and planning practices.

Experts predict even more advances over the next decade. Innovations that are currently in the planning and production phases include wireless digital technology that can do anything from yield monitoring to remote sensing, smart machinery that operates with little or no supervision, the use of DNA sensing chips and nano lasers, and continued biotech advances.

As innovative technology is developed and implemented, farmers will be able to improve efficiency and production. The one thing that won’t change, however, is the impact the industry has on our society. As a civilization, we owe a great debt to farmers. In the words of lawyer and politician John H. Douglas Jr., “Our deep respect for the land and its harvest is the legacy of generations of farmers who put food on our tables, preserved our landscape, and inspired us with a powerful work ethic.”

When is the last time you thanked a farmer?