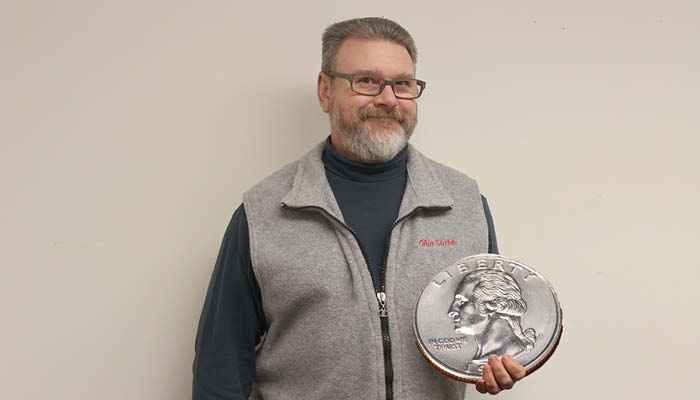 Many people in America have some sort of collection in their possession. Some collections started as young children, while others have emerged as a result of adult interests. The most valuable collections consist of items from years past – vinyl records, video games, stamps, coins, etc. The older and more obscure an item is, the more value it contains. For some collectors, however, making money is not the objective. They value their collections because of its historical and artistic value. For those types of collectors, the worth of their collections cannot be measured.

Ken Lepper began collecting coins at the age of ten. “I had a friend whose father worked for a vending machine company and part of his job was to empty the coin boxes,” Lepper explained. “He let my friend and I search through the coins before he took them to the bank. We could keep interesting coins as long as we replaced the exact same amount.” For Lepper, rummaging through those coins sparked an interest that has never waned. It wasn’t long until others were helping him build his collection. “Once I got interested in coins my older relatives, particularly my great uncle, gave me older coins they had saved,” he said. “The Indian Head pennies he gave me are still part of the core of my collection.”

Lepper is currently the President of the Red River Valley Coin Club (RRVCC) in Fargo. The club itself can be traced all the way back to at least 1956. According to Lepper, the club’s foundational goals are to encourage coin collecting and education about coins. In addition to their regular meetings, the club hosts two annual coin shows and one coin auction. The club also provides educational opportunities for young people who are interested in coin collecting. “One of the things that makes the coin club special is the multi-generational nature of the hobby and membership of the club,” Lepper explained. “There are great learning and mentoring opportunities for young members and re-invigoration for older members.”

Lepper believes that coin collecting offers young people more than just a simple hobby. “Coin collecting helps develop organizational skills, prioritizing, and delayed gratification,” he said. “It also teaches math, history, and economic principles in a non-classroom and self-guided learning environment.” The hobby’s biggest asset may be the ability to get children away from video/television screens. “I’m a parent and one of the things that experts have been recognizing about the development of young minds is a need for balance,” Lepper said. “The tactile, non-electronic entertainment offered by coin collecting is a great balance to screen time.”

Lepper’s daughter has also become an active coin collector. Her passion for the hobby began on trips to coin shows with her father. “Most coin dealers have a bin of low value coins that they let kids pick a ‘souvenir’ from,” Lepper explained. “She noticed that many coins have images of animals on them and her collection was underway just that fast – to see how many different animal coins she could find.” The support she received as a new member of the RRVCC is another thing Lepper believes makes the club so special. “There is a great deal of support and encouragement for new collectors if they join a club,” he said.

Lepper has met people who began coin collections for a variety of reasons. Some are history buffs who view their collections as a link to the past. “The growth, development, and ideals of our country are embodied in coins,” he explained. For other collectors, it is the excitement of the chase that draws them in. “It is hard to put into words, but there is a thrill or enjoyable challenge in the process of trying to complete a set of coins.” Finally, some coins are collected purely for their esthetic appeal. “I once read, ‘Coins are tiny pieces of classical fine art that anyone can collect.’ Many collectors feel that US coins produced in the 19th and early 20th Centuries are far more artistic than modern coins.”

A smaller group of collectors build their collections for purely financial and/or investment reasons. Before 1965, coins were made of silver. Before 1930s, the US issued gold coins in various denominations. “These coins have increased in value many fold over the years,” Lepper explained. “Unlike some other forms of collectibles, these coins have intrinsic value due to the precious metals they contain.” An extreme example would be the 1794/5 Flowing Hair Silver/Copper dollar that sold for $10 million at a 2013 auction. Other valued coins include the 1933 Gold Double Eagle ($20 piece), 1804 Silver Dollar, and 1913 Nickel.

Lepper would like to see more people get interested in coin collecting. “Whether you collect for memories, history, art, or investment – coin collecting has something to offer,” he said. “A lot of people may think coin collecting is boring or you need a lot of extra cash, but it’s fun and you can collect from pocket change. Everyone’s collection starts somewhere.” Annual membership dues for the RRVCC are a mere $5. “Give it a try,” Lepper encouraged.

More information about the RRVCC can be obtained at www.redrivervalleycoinclub.org. Regular meetings are held at 6:30pm in the Moorhead Library on the 1st and 3rd Tuesdays from September through April.