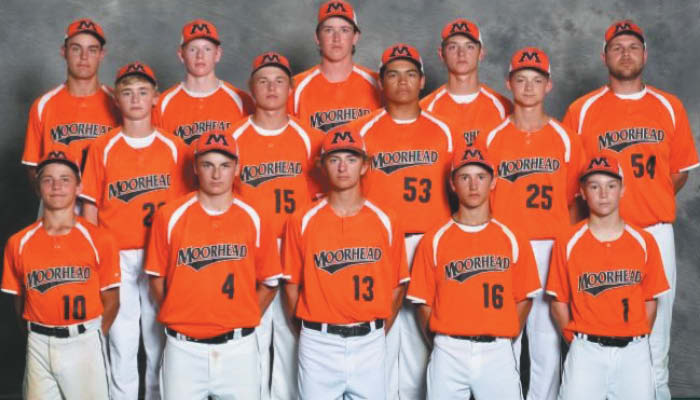 Brooks and Matt Saari are the tournament directors for Moorhead Babe Ruth Baseball.

“I’m looking forward to it. We provide an unforgettable experience for these kids. It’s a big accomplishment to be in the tournament. These players are the best of Babe Ruth from their state,” Saari said. Teams are coming from Minnesota, North Dakota, Iowa, Nebraska, Missouri and Kansas.

The games will be great family entertainment. This is high-level youth baseball. Teams and their families and friends – baseball lovers – will see 10 teams over five days of pool play and a championship bracket.

The week includes 29 games in four days. The tournament champion will advance to the Babe Ruth World Series Aug. 11-18 in Westfield, Mass.

Moorhead Babe Ruth officials are excited because this event will attract hundred of players, coaches, families and fans. Local baseball fans are encouraged to enjoy the event, which has been in the works for more than a year.

Volunteers staff everything and volunteers are still welcome. Contact either Brooks at 412.8733 or Saari at 200.3530 to be part of the fun. “We could still use volunteers to help cover gate tables, concession stands and/or help with grounds/dugout cleanup in between games. If there are folks who'd like to volunteer and see some great baseball free, I can provide the online sign-up link to anyone who is interested. We'd especially be grateful if there are other service groups who would like to help,” Brooks said.

“We’ve had a number of local businesses step up to support the tournament. We could still use more partners in many ways if they’d like to support the event,” Brooks said.

Moorhead has hosted several state tournaments in the past few years. “We’ve done them so well that we earned the opportunity to host this regional tournament. Baseball folks all over Minnesota and North Dakota have come to know Moorhead as a great destination for baseball tournaments,” Brooks said.

The Moorhead Black team will be the host team. They earned their way to the regional tournament last year as 13-year-olds when they won the Minnesota state tournament. “They have been hungry to go back again as they feel they have a shot at winning this regional tournament, too,” Brooks adds.

One of the players on the Moorhead Black team is Saari’s son. “Being on the team means he has friends and teammates. This is the fifth year these boys have played together. It helps on the field that they are also friends.

“Because these teams get to know each other there is a good rivalry,” Saari said. “These are the biggest years. From ages 10 to 14 there is a night and day difference in the players. It is truly a transformation. It is fun to see the players develop,” Saari said.

“I’m looking forward to it,” Saari says, adding how happy he is to be part of providing this experience. “This is a big accomplishment for these kids.”

“Come get involved and have some fun with us! What could be more American than hot summer weather, some great youth baseball and the awesome pageantry of the opening ceremonies,” Brooks says.