Moorhead’s smallest park gets a facelift 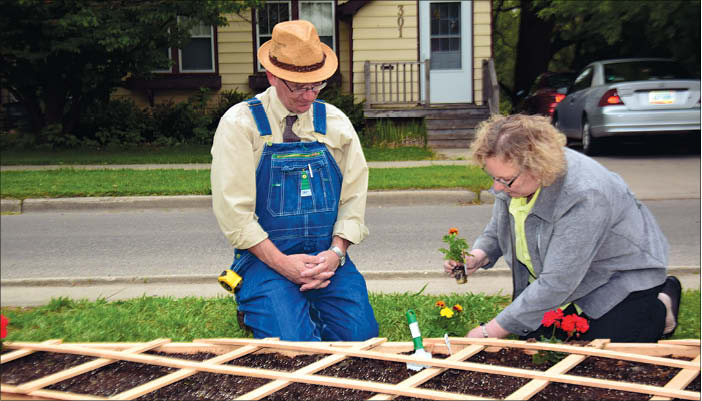 “To plant a garden is to

The next time you drive by Moorhead’s Daily Park, take notice of the new vegetation. “Where is Daily Park,” you ask? If you’ve never heard of it, you’re not alone. Located at 301 3rd Avenue South, Daily is the city’s smallest park, barely more than a traffic median. That doesn’t mean it deserves to be neglected, however, which is where Brian Fuder comes in. Using a concept called Square Foot Gardening (SFG), Fuder is trying to change the way people think about horticulture and space, starting with Daily Park.

Fuder is a certified SFG instructor, a system he describes as “Tylenol free gardening.” It is an innovative grid-based method of gardening that was created by Mel Bartholomew in 1976. Bartholomew wanted to devise a system of growing that was both easier and more efficient. Forty years later, Fuder is determined to bring SFG to the masses. “I want to create a SFG presence in every community,” he said.

Many people begin the summer with glorious gardening aspirations. Inevitably, the activity soon becomes overwhelming. By the end of the season, those people are so sick of gardening that they swear it off altogether. Fuder is trying to change the belief that gardens have to be large and unwieldy. “It is better to start small and be successful,” he explained, using Daily Park as his example.

Fuder chose the park as his first public project to show people that size doesn’t matter. “I wanted to get SFG out in the community so people can see the possibilities,”he said. Fuder’s gardens require 80% less land and 40% less work, while still yielding the same amount of produce as a regular garden. “We break it down to a manageable size to ensure success,” he explained.

SFG typically involves a 4’ x 4’ grid that can be planted with virtually any normally produced fruit, vegetable, or flower. According to Fuder, one 4’ x 4’ plot can yield enough produce for a fresh salad every day throughout thegrowing season. An additional plot can provide one fresh vegetable a day during the same period.

The size of each plot is perfect for people with little outdoor space. Fuder can also create vertical plots or structures that can hang on a fence. If you can imagine a design, Fuder can create it. This is especially helpful for gardeners with mobility issues, those that can no longer bend over, or even those in a wheelchair.

Fuder takes special requests that are funded by donations via the organization’s GoFundMe account. Recently, he delivered a special elevated SFG to two Thief River Falls sisters who are both blind. “They were so excited and appreciative,” Fuder explained. “The sheer satisfaction I received from that experience was amazing.”

In addition to beautifying areas like Daily Park, Fuder is also launching several projects geared toward getting community members of all ages involved in SFG. Classes are scheduled throughout the summer that detail beginning concepts like how to start and then maintain a SFG. In addition, Fuder has created an eight-week SFG camp that can help children learn the system. “It’s never too early to learn,” he said. “Dirt makes kids grow too.” Finally, Fuderhas started a Community Supported Agriculture (CSA) program the helps community members gain access to fresh produce throughout the growing season.